The Latest Legal and Industry News surrounding Transport, Waste, and Health & Safety
Brought to you by Dyne Solicitors

A man from Northamptonshire has been handed a 12-month suspended prison sentence after dangerously hoarding over 1,000 tonnes of waste tyres.

Andrew Eyre, 50, his ex-business partner John Mullen, 59, and his company were sentenced on Friday 17th January 2020.

​Eyre and John Mullen, 59, were joint directors of IN4 Limited until February 2017, after Eyre retired leaving Mullen as the sole director.

According to their permit, IN4 Ltd were only permitted to store up to 84 tonnes of tyres on their site in Brackmills Industrial Estate. However, during an Environment Agency inspection in March 2017, they were found to have more than 15 times that amount - more than 1,300 tonnes of waste tyres being stored with no care taken to prevent potentially life-threatening fires.

​By April 2017, the site had been entirely filled with tyres and abandoned. 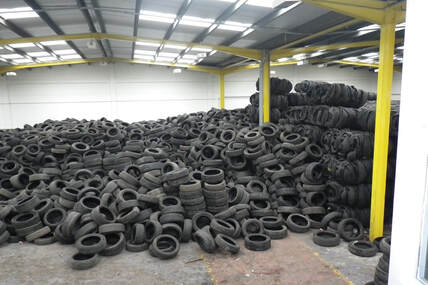 Piles of abandoned waste tyres left behind by the prosecuted
Meanwhile, Eyre, who had set up another company, 'Synergy Tyres', continued to stockpile tyres for 4 months, despite not having a permit, until Environmental Agency officers discovered more than 120 tonnes of tyres at Broad March Industrial Estate in Daventry.

It was told that the pair's actions could have seriously polluted the environment and risked nearby people's homes, health, and lives.

​Synergy Tyres Ltd and director, Eyre, were sentenced by Judge Mayo who said that there had been "a deliberate and flagrant breach in the face of warnings given".

Synergy Tyres was ordered to pay a fine of £11,250 and handed Eyre a 12-month prison sentence suspended for 12 months, provided that he stays out of trouble and completes 150 hours of unpaid work. Mullen was given a 6-month community order with the condition that he completes 15 days of Rehabilitation.

Further enquiries, specifically into the Proceeds of Crime in the case, have been postponed to a later date.
Image & Information Source